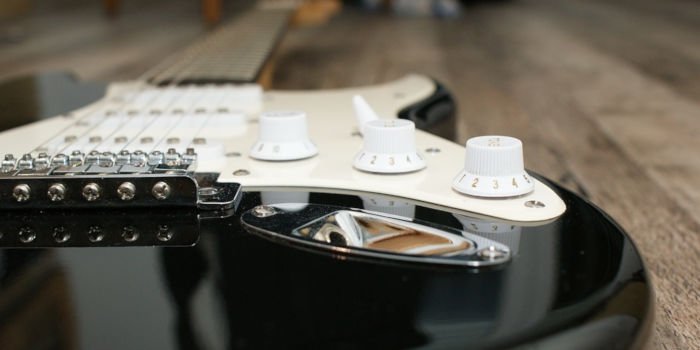 As I do more teaching, I’m often asked

Buying a beginner guitar or even your first guitar doesn’t have to be a hard choice. I always recommend buying a Squire Stratocaster starter set (which is available on Amazon for $230) or a similar package.

Firstly these start packs contain all you’ll need to get started. Typically in addition to the guitar, amp, cable, the package will including a tuner, picks, strap etc.

Also, I don’t think you should spend a small fortune on a guitar, pedals and amps until you’ve had a few lessons. After a few lessons, you’ll see whether you’ve enjoyed learning guitar and if you want to continue.

If you’ve learned the basics and love playing then start to invest in guitar gear.

Another point about the Squire beginner guitar package and most other sets is out of the box there not bad – not great but a lot better than when I started nearly 20 years ago.

Two things I always recommend if you’re buying a package. The first is, buy a decent cable. The one included in the package has moulded ends, which are rubbish and easily broken. A good jack to jack cable will only cost you a few dollars and is worth the money.

I also recommend replacing the tuner as you’ll want to learn to accurately tune your new guitar from the start. Boss and Korg offer fantastic tuners, some which also include a metronome. Also, D’Addario offers a really cool and affordable NS Micro Clip-On Tuner (only $22 at Amazon).

Give your guitar a setup

The other I recommend is look at how high the strings are from the fretboard. This is called the action. Having a lower action makes the guitar easier to play. While I’ve written about how to setup a guitar before, here are my top tips.

If you’re starting out and have a guitar with a tremolo system, it’s best to lock it down so you can’t use it. On a Stratocaster style guitar this means you need to remove the backplate and tighten the screws which hold the springs.

You can tell if your successful as the metal block which the strings pass through, will be tight against the body. By doing this, you’ve massively improved the guitar’s ability to hold it’s tuning.

Your guitar’s action is dependant on three elements.

First, the height of the frets. If you have uneven frets then it will be hard to lower the action and make the guitar easier to play. The only way to solve this is by using a flat edge ruler, a file and sandpaper. This will take a few hours to get right, so it’s best to go slow and make small adjustments.

The second is the truss rod, which is usually hidden. This metal strip controls the curve of the neck. Some players like a dip in the middle of the fretboard, others like it flat. It’s best to play with your trust using the Allen key which is included in the set. Again small adjustments. Also, remember to loosen the string before you start tweaking.

Finally, the height of the bridge. On Stratocasters, the bridge has 6 saddles, each of which can be adjusted with an Allen key. As you raise or lower a saddle watch for fret buzzing and aim for a consistent height between all the strings. On Les Paul guitars the bridge can be lowered or raised by two pegs which hold it in place. Make small adjustments after loosening strings.

While this is a really complex topic, it boils down to how the string sounds over a distance. For example, play the lowest string open and then press your first finger on fret 12. If this sounds equal then you probably have good intonation.

However, should the 12th sound lower (flat), then you’ll need to move the saddle away from the bridge pickup.

While I consider the Squire starter packs to be the best beginner electric guitar, I’ve also reviewed a number of good yet affordable guitars. All would be a great place to start or upgrade too once you’ve covered the basics with a good local guitar teacher.