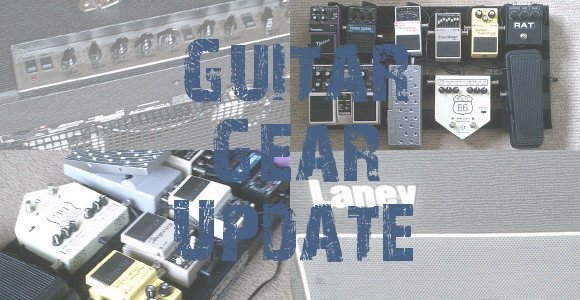 In the last 6 months, I’ve purchased and sold a number of guitar gear: mostly pedals. And also a new guitar. So it’s about time to explore what guitar gear I’m currently using. and the Rockingham – which I still love (and I’ve been using it a lot for teaching as well!). I have added a Tele to the fold – It’s a cheap one and is prime for a project. My first real live auction buy!

However, I’m suffering from a lack of time. We all are! So it might take me a while to get around to the tele. I’m hoping to make some time and spec it out and then upgrade key parts – like the bridge, tuners, nut etc. The jack plate was completely broken into bits (luckily, being held together by the screws/jack socket). And so the crap broken plastic was changed for a metal one. Much better!

With the addition of the Tele, I feel that all the bases are covered. For some reason, I really prefer the Telecaster to a  Stratocaster. Having owned a few Stratocaster over the years, I never seemed to get along with any of them. The Telecaster is still spanky in the bridge (anyone for country?!) and middle, yet mellow enough on the neck that it’s usable for most styles. I’ve got 10s on it at the moment, which a little heavier than normal, but works for me and my sweaty hands! [No Tele pictures until finished! Hey, I make the rules!]

The only guitar I need now is a proper acoustic, as my current one isn’t up to scratch. Other than that, pretty happy with the small collection! All guitars are now in hard cases, most have strap locks  and I’ve been upgrading straps to either fender standard straps (which are really comfortable) or wide leather straps. Another idea I’ve been trying with straps is play with the height, well really, raising them slightly. Yes, in my old age, I’m start to care more about ease of use than fashion! By having the guitar closer, it’s easier to play and leads to a better overall performance – as I’m not struggling to reach notes/chords or expending unnecessary effort. Lots of changes here! The main and larger board is still pretty much as was. I’m still using it but the smaller board is seeing more action these days. Why, I hear you ask! I love the big board, really, I do but it’s over kill for most gigs I’m doing – It would be like taking a Rolls Royce to the corner shop for a pint of milk – rather than walking 5 minutes!  Sure, it’s cooler and for gigs where I need a lot of tones, I’ll keep using it.

Unlike the big board, the smaller one has completely changed. Late summer last year, I had a few gigs coming up – I even wound up using it on a few video shoots as well. In short, the old configuration of pedals was working any more, so it had to change and having some gigs coming up, was a great excuse to try a new layout. In general, I’m Running the amp slightly louder than before and use the volume pedal as a way to gain finer control over volume. Also as there’s is two overdrive pedals, each one is being run differently. The first one (Expandora – which is getting swapped for Joyo California soon) is more overdriven and is just slightly louder than the clean tone, which evens out in a band setting. The Timmy (second) is set overly loud and less distorted. I can get a wide range of distortion tones from slightly overdriven to heavy – without needing a million dirt based pedals. Plus I have the space to add, another one or two pedals, like a RAT or Big Muff, should I need it.

The ENO chorus pedal, isn’t properly on the board yet, I need to velco it on and buy some George L’s. This chorus pedal sounds modern enough for subtle sounds yet has the range to get into faux Lesile. There’s huge tonal variants in just moving the depth knob. [I’ll try to do a video of it soon]

I’m not sure about Akai Headrush, even if the looping function is pretty neat. Also, I’m thinking of replacing the Dano tremolo (after 10 years of good faithful usage!).

Oh, and the George L’s on the board make it sound better and rock solid! Plus, eBay helped to reduce the cost of George L’s by up to 50% which is a bonus. Still happy with the Laney VC-30 for gigs and the Vox PATHFINDER 10 for smaller gig, rehearsals and teaching. So, no change there!

So that’s more or less where I’m up to in terms of guitar gear for gigs. What guitar gear are you using? Any changes?