How To Build A Pedalboard One of the most confusing thing in guitar playing is how to order effect pedals! Which should go first? And which last? So here’s how to build a pedalboard.

Firstly, is there a correct order to place the pedals in? In a way, yes, but rules are there to be broken, right?!

So there are some rules, but it’s really is a matter of messing with what you have and playing around and seeing what works for your music and what helps you translate what you hear in your head into reality.

This will totally depend on the types of gigs you’re playing. For example, If you’re doing session work then you’ll want to build a pedalboard which is flexible, easily changeable and can be integrated with different systems with effortlessly.

If you’re playing heavy metal in clubs which are sure to get rowdy, then you’ll want to build a pedalboard that is robust and can’t be broken!

Or you’ll want to find a way to build two boards. A control board, which doesn’t matter if it gets damaged. And the other one with the actual pedals on, which is stored behind the amps – in a relatively safe location!

This might sound stupid. However, if you’re like me you probably collect guitar effects pedals! My current total is around 30, down from 50 a few years ago. Yes. it’s a lot! I didn’t start off trying to collect them, it just happened! Well that my excuse and I’m sticking to it!

Anyway, when I’m starting to build a new board, I’ll think about what I’m going to be using it for. What tones I’m after, whether I need it to be flexible both in terms of sounds and in terms of being able to add in another FX pedal or use in conjunction with an existing setup.

I’ll also think about the guitars and amps I’ll be using the pedal board with. If it’s for Jams, I’m will probably choose pedals that are natural sounding and work well with a load of different amps. So, overdrive pedals with a big mid hump need not apply!

Again I’m really thinking about this, so I’ll hopefully avoid a lot of the problems that I could have later. I’ll grab a few pedals and do a shoot-out to find the group of fx pedals that really work the best together.

Don’t forget a tuner. No one ever wants to play with an out of tune guitar. I like the BOSS TU-3, it’s solid and well built.

This is where the fun begins! I get lost in this stage for hours. Try every chain you can think of. Keep experimenting!

It could be a good idea to record something simple and easy to remember every time you change the signal path. So you can listen back and hear if it’s adding or taking away from your base tone.

If you’re using a lot of pedals consider grouping a few in a true bypass looper. This will make it easier to control and save your tone, while making it easy to troubleshoot if your pedalboard goes down.

After all the experimentation, write down/photograph exactly what is going on – as simply as possible. 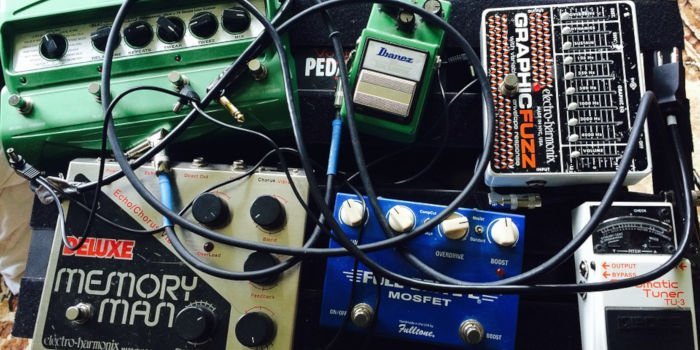 I’m a big believer in less is more. Yes, I love pedals, guitar and amps but I want to use the simplest setup possible.

If you have a ton of pedals on a gig then you’ll be tempted to play with them rather than connect with audience. The guy leaning at the bar won’t know or care if you’re not using the exact sound from the record, but he will care if you look bored or spend too much time looking at your pedals.

If you have loads of pedals in front of you, it’s time to remove some and learn how to use what you have better. Can you use your volume pedal or control to give you the same sound you’re getting from a pedal right now?

Could you replace a few modulation type pedals with something like a Line6 M5? It will save space, time and might cost less than what you’re using right now.

#5 Mark out the area you have to play with

With tape, mark on the floor the area you have to play with. You’ll need to get it exactly right or you’ll end up messing up and having to start again.

Lay out the pedals on the floor and try to get them to fit in the space which you have. Then try a different layout, pretend you’re playing a gig. Can you easily to click each pedal in and out?

If you want, grab a guitar have a jam to test how the pedalboard preforms in the real world.

Is one of the pedals you use a lot hidden behind another and less used pedal? If so, try moving it.

Even if you prefer having certain pedals in specific spots, try moving them around. Try as many different set-ups as possible.

You can always use a true bypass looper to group pedals, create insert points, or maximise the space.

You might want to do this for each and every set-up you think up and try out. Take photos, so you remember where it all went!

Don’t worry at this point with getting the right length of cable or getting the layout to look seamlessly clean. Remember, keep trying different ideas.

Can you hit each pedal you need to? Can you get all the tones you need? Is one of the leads a dud? Does one of the pedals have a faulty socket? Try it, test and fix it. 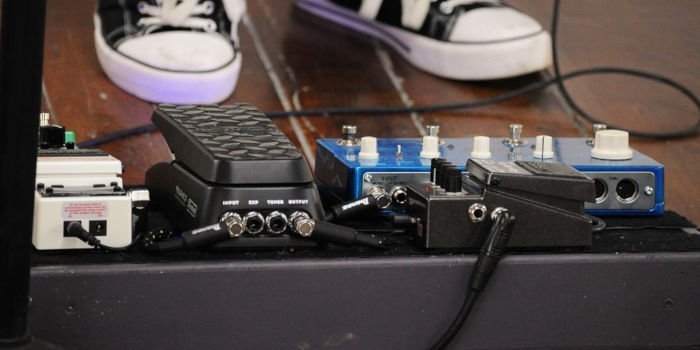 It’s good to draw a rough diagram and take some pictures. That way should it go missing you’ll know exactly what you had.

It’s also good to keep track of signal chains as you could find some great tones with this board which just might be the right sounds for the next project you do – long after the board has been stripped and changed.

#9 Get the FX pedals ready

Planning to use Velcro? Then you probably want to remove the rubber off the bottom of the pedal in order to create a flat surface.

If you’re using pedals that you have used before and they have Velcro on them, it could be a good idea to tear it off and start again. You might want to clean the glue off the bottom of the pedal using turpentine (sometimes known as white spirit).

You can also use this turpentine to clean the board as well if you’re tearing that back to nothing as well.

Attach the pedals, then the power cables. With any and all power cables, it’s a good idea to check that no shorts are happening. You’ll know you have a short as all the pedals will turn off as there’s no power.

If this happens, you need to start up plugging the power cables until you have lights again. Shorts can happen from within the pedal or when two bare wire touch or when a power lead touches a bare metal case.

Anyhow, at this point it’s time to make new cables or to reuse the ones you have if they’ll fit. So it’s time to start measuring, cutting and soldering (or screwing for those who are solderless!) patch cables for the pedalboard.

My pedalboard of choice is the PedalTrain – which allows for maximum flexibility as you can run cables underneath the frame and use velco to hold the pedals [which makes it super easy to change them].

Some more fun! Great, where did that guitar go?! Test all the pedals out, still sounding great? Should do!

You might want to play for a long time, try packing up and setting up again as this will reveal a fresh set of problems like faulty input jacks, cables that have gone bad or Velcro that hasn’t stuck and has got lose. 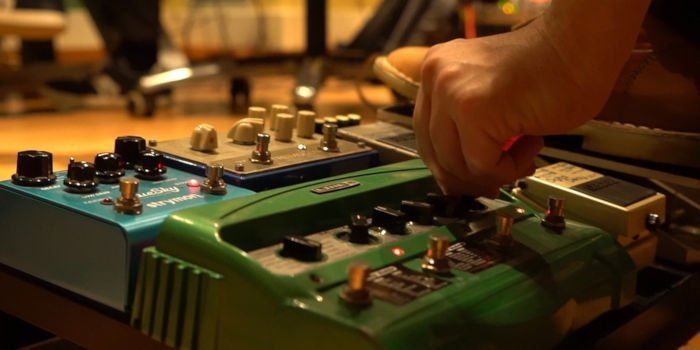 Any problems you do find, now is the best time to fix them. The WORST time to fix gear problems is at a gig when you have no time to do it properly. Make sure you solve all your problem here and then retest.

So that’s how to build a pedalboard! Have fun!