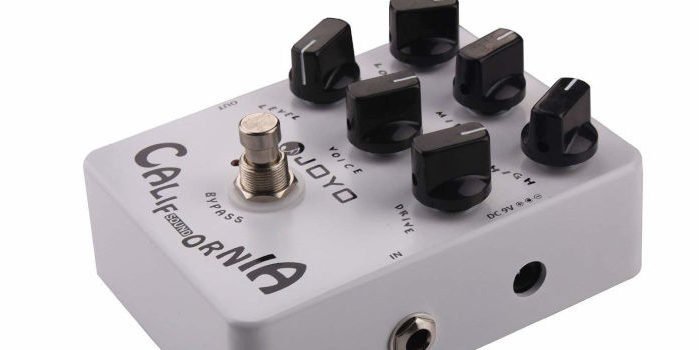 The Joyo California Sound Pedal is a complex guitar distortion effect stompbox reportedly based a Tech21 pedal of a similar name.

It has a lot of features and is capable of producing a wide range of tones from a transparent boost to full out over the top fuzz sounds.

When you think of California as a guitar player, two brands usually pop to mind. Fender and Mesa Boogie. Both build excellent products but we’ll be focusing on the later brand.

What the Joyo California Sound aims to recreate is the famous Mesa Boogie tones of their early amps – think Mark IV for example. If you’ve ever had the privilege of playing through one, you’ll know all the channels are pretty special and cover a wide tonal spectrum.

This Joyo pedal, which is also rebranded by Thomann as part of their Harley Benton guitar effect pedal range, provides a massive amount of distortion tones.

If you’re on a gig where you can’t use your own amp, the California pedal can double as an EQ boost and transform a dull sounding amp into an inspiring tone.

The pedal provides a range of distortion sounds from a classic blues breakup sound, to over the top fuzz and everything in between.

Thanks to its range of controls, the Joyo California Sound is a really versatile guitar effects pedal. Way better than the JOYO Ultimate Overdrive Pedal, which I’ve also reviewed.

Also, you can use direct into any DAW for studio recording and it sounds pretty good.

Overall the Joyo California Sound a well-constructed pedal with the two jack sockets screwed to the case and not moulded jacks on the PCB. This is certain to increase the life of this JOYO pedal.

The power socket is PCB mounted and isn’t fixed to the case. It’s also on the side of the pedal, which is a little annoying. As is the LED placement, located next to the foot switch. Luckily, the LED is super bright and really easy to see on stage, despite its weird location.

The battery compartment is easy to access and uses a plastic door on the bottom of the pedal. This makes the pedal easier to use in a number of situations without any issues.

The first thing to mention is there’s a lot of controls. I’ll try to give you an overview of each one.

A long the top row is a three-band EQ: Bass, Mid, High. Pretty standard and simple to understand, so far.

The second row has a Level control, which is the overall volume of the pedal. Next, the Voice control changes both the gain structure and the EQ as you move it. Finally, the Drive control allows you to add more or less distortion to your guitar sound.

Also, the Joyo California is true bypass which an added bonus and will ensure you have a cleaner signal path.

Let’s start with boosts sounds. If you just want to shape your overall EQ then keep the Voice and Drive controls down low and the Joyo California Sound’s 3 EQ and Level controls to suit.

If you want a mid-range honky boost, then keep the Voice and Drive low and roll back the Bass and Treble control. You’ll want to turn the Mids way up.

If you want a tube screamer type tone, then just increase the Drive control.

In terms of volume, lots is available. So, if you do use it as a boost, you’ll find you have more than enough volume lift for every situation.

Getting into distortion tones. The Voice control changes the core sound of the pedal and can provide a range of usable tones, simply by moving this control.

The EQ on the pedal is just as reactive as the Voice control and allows you to go from bluesy overdrive to scooped metalish tone by simply backing the Mid control down.

A note on the pedal’s EQ, the bass control provides about 4 times the amount of low end you’ll ever need. So, you’ll need to play with the pedal’s EQ controls to really understand how it works for you.

Of course, you’ll need to keep tweaking until you find what guitar tones work for you.

I’ve owned this pedal for about 2 years. I’ve used it on gigs, in teaching and have sold a few to students as well. To my ears, it’s one of the most versatile distortion effect pedals I’ve played or used. I highly recommend you buy one! And with a bit of tweaking, the Joyo California Sound pedal has replaced my RAT on the pedalboard.

The best tip I can give to get your head around how versatile this pedal is to set the EQ controls at 12 o’clock. Then set the Gain and the Level controls around 10 o’clock. This should provide a nice overdrive tone. I’d then suggest playing the Voice control to see how the pedal changes as this knob is moved.