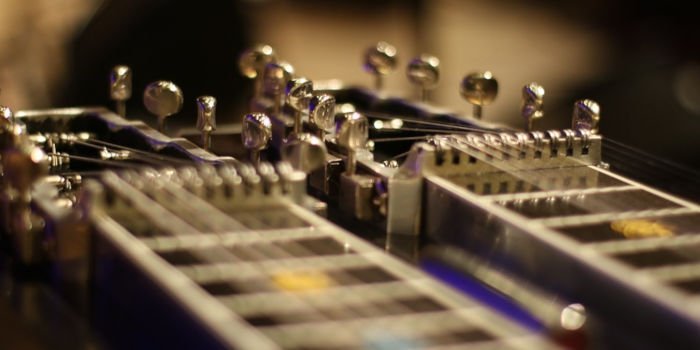 The Nashville Numbering System is a powerful system which will make you a better musician.

Using the system will enable you to transpose music on the fly. Also, you’ll only ever need to write out one chart. No matter what the key of the song is.

It doesn’t matter if you’re a guitar player, a Keys player or an all-round musician, the Nashville Numbering System can help you skyrocket your playing abilities!

The underlying theory of the Nashville numbering system is quite simple and you probably know it already.

Lets’ dive in, below is a G Major Scale:

I chose G, as it’s a guitarists’ favourite key!

If we use this scale to build three-note chords (Triads – if you’re stuck, I’ve written two books about them).  We get something like this:

We can give each chord a name

You might know some if not all of these. If you don’t, then buy a chord book!

If you understand some more advanced theory, you can keep building these chords by adding further notes (making Minor 7th, 9th chord and Major 7th).

Not sure? Then you should buy a book on theory or start with my FREE eBook. It’s worth taking some time to learn about chord construction.

So with our basic theory covered and with each scale note having a chord, we’re ready to learn the system.

If you were watching closely you would have seen I’ve revealed the system already! If you didn’t, go back see that I have numbered each chord.

That’s the basis of the system. Let’s have a look:

First, we need to label each of the chords with a number. You can either use numbers or, as I prefer, roman numerals.

Hopefully, this is simple to understand. However, there is one problem, we don’t know the type of chord. Is it Major or Minor or 7#5?

Now like the number or Roman numerals issue, we can denote the type of in a few ways.  We can use capital Roman numerals for Major chords (e.g. V) and small for Minors (e.g. vi).

We can also use nothing to denote Major, small ‘m’ for Minor chord and either ‘dim’ (for diminished) or °.

A few other and pretty common chords are:

Like we would normally, the slash infers a bass note. You knew that already!

Also, we still use numbers to indicate the quality of the chord. For example, if you have an Am7 (still in the key of G), as A is the II chord in the scale, we would notate it as IIm7.

Some other common chords like D9 would be written as V9, G69 would become I69 and so on.

How To Use The Nashville System

The main use, for me, is writing charts for function gigs and house band gigs where the singer is likely to change and want to play the song in their own key.

It means you’re not running around trying to rewrite song in the breaks or making mistakes in the five minutes you have to run a whole set (yes it can be that short!).

It’s useful in the studio, as the singer might want to take the song down 2 tones for a take then decide to take it up 3 semi-tones, then scrap that and go back to the original key. That also happens!

The best way to get to grips with it is to try it on a song! Let’s go!

So, I’ve stayed with the key of G – nice and simple. If we rewrite this in numbers, it looks like this:

We could now play this in Bb or D or F. This could take some work but would be easier to work out than starting from the G version.

Now in D, well go on! D would look like:

For me, I hear music in terms of the number of each chord, the 5th chord, for example, will always sound like the 5th chord. It’s kind of hard to explain, the best way to say it is that I have internalised how each chord sounds.

Sadly, I don’t have perfect pitch. However, being able to hear what each chord sounds like, provides me with a workaround solution.

This is really useful as I can hear songs and play along as I can hear where the chords are moving to (as most songs follow simple and common patterns) and hear which chord it is. So, all I need is to add the correct key and I’m there!

Putting It All Together

So, that’s a quick introduction to the Nashville Numbering System. Take some time to understand the basic theory behind it, how it can be notated and why it is powerful.

Have you ever used the Nashville Numbering System?