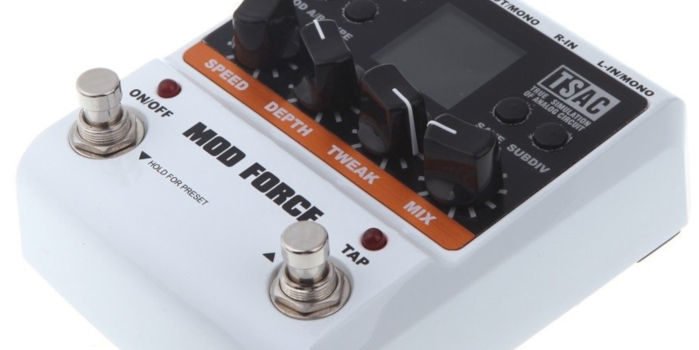 The NUX MOD Force Multi Modulation Effects Pedal is a pedal that I’ve been after for some time. I wanted one as it should enable me to simplify my pedalboad while still having great guitar tone.

The NUX MOD Force has 12 different types of modulation, the ability to store up to 9 presets, a kill dry function, tap tempo, and stereo inputs and outputs.

The NUX MOD Force has 12 different types of modulation effects including Chorus, Flanger, Phaser, Tremolo and Vibrato. And so if you’re running say a tremolo, chorus and phaser on your pedalboard, you could replace these three pedals with the MOD Force and still cover the same tones.

In addition to running one sound at a time, the pedal has a dual mode which allows you to combine two sounds (e.g. chorus with tremolo) at once.

The screen allows for easy viewing of setting and indicates what each of the four control knobs control.

In preset mode, the screen changes to show the number of preset in a large and easy to read font.

The pedal is well built, using good quality jacks, footswitches and a metal enclosure. The screen is really easy to read in both modes – really useful in a gigging setting.

The two things to me that aren’t so great is the pots which aren’t attached to the enclosure. So, if you’re likely to knock the pedal, you could snap a pot.

And the power supply jack on the back isn’t fixed to the case. You can also power the pedal using a 9-volt battery.

All in all, it’s a well built and should survive some gigging abuse.

There’s a lot of controls, including a few that are hidden on this pedal. On the back, there’s a power socket, stereo inputs and stereo outputs. The pedal can be run mono in and stereo out and use the MOD force as the stereo split. This is really useful features for those like to run in stereo.

MOD A/B – allows you to add a second modulation effect to the first and create a load more sounds.

Type – which of the 12 effect types you want to use.

Save – This button has a dual role. If you click it once, the screen will flash and you’re now in preset mode. Using the tap tempo footswitch, you can cycle the presents until you find an empty one to save the sound.

If you hold it down for two seconds, then it activates configuration mode, which allows you to set kill dry off/on, bypass type and whether the pedals starts in preset or manual mode.

Subdiv – allows you to select the note value for the tempo. You can set this from a whole note to an 8th and all other increments in between.

There’s 4 control knos on the second ro. These control different things depending on effect type, so check the screen to see what each knob control:

Speed – controls how fast or slow the effect is.

Depth – is how much effect you want.

There are the two footswitches. In manual mode the left is on/off and the right controls the effect’s tempo by allowing you to tap the speed into the pedal.

If you hold down the left footswitch for 2 seconds, the pedal switches to preset mode. The left footswitch still controls on/off. The right cycles through the 9 presets, allowing you to recall previously saved sounds.

For gigs, I need a chorus sounds (for 80s type stuff), tremolo and Phaser. I found that out of the two, the Tri-Chorus sounds the best as does the Bi Phaser. The tremolo sound is quite cool too. As quickly as I found sounds, I was able to save them to presets, enabling me to think more about playing the gig than tap dancing!

I’ve never got how to use a Flanger sound, so they sound classically weird but I can’t seem to find a use for them. I feel the same about the Vibrato effect.

The Auto-Wah and Rotary Speaker effect surprised me the most. The Auto-Wah is really usable and sounds phat! The rotary speaker sound is best when the controls are turned most of the way up. I’d use this sound for Jazz comping or if I was asked to get that Avril Lavigne “complicated” / early 2000 pop rock sounds.

The Uni-Vibe sounds too much like a phaser on low settings to be useful. However, it has a more musical swoosh tone when you start to tweak the controls. This effect required a lot playing with it to find a sound that would work live or in the studio.

Is the NUX MOD Force the best modulation pedal ever? No, it isn’t. However, is it a hugely versatile and inexpensive pedal? Yes.

I half expected it to sound cheap, thin and be unusable. However, it sounds really good and is pack full of features, which are easy to use and understand. I do think this pedal is just as good as something like the TC electronic Nova Mod (no longer in production) or the modulation section of the Line6 M5 – just at a fraction of the price.

If you’re looking for a modulation pedal which covers a lot of ground, sounds good, is able to save/recall preset and is user-friendly, then you have to consider the NUX MOD Force.